Born in London in 1846, Kate Greenaway exhibited a prodigious talent for delicate illustration. She attended the School of Art in South Kensington and completed her education in the Slade School of Art at University College London. She is now celebrated for her charming and nostalgic illustrations of childhood in the English countryside.

The British library and the Internet Archive book collections  contain some wonderful examples of  Greenaway’s work. Her early books of illustrated verse, particularly Under the Window (1879) and Marigold Garden (1885) were hugely popular at the time of their release and feature sentimental scenes of costumed children playing in a range of idyllic settings.

The Dictionary of Women Artists describes Greenaway as being “at the forefront of a movement to supply well-designed and well-produced children’s books to a market that was booming under the influence of Forster’s Education Art of 1870” (Huneault 611). As Daniel Hahn notes, Greenaway’s cards and drawings also

“…show children dressed in part-remembered, part-invented late 18th cent. frocks, coats, and bonnets. She was her own needle-woman (her mother kept a dress shop for a time), and made the garments worn by her models; she generally drew from the life and was good at amusing the children who modeled for her. Before long she had created the beginnings of the fashion for “Kate Greenaway” children’s clothes” (Hahn 247).

Greenaway’s colourful and detailed designs inspired a new fashion trend with department stores like Liberty of London transforming her designs into colourful clothing for children. Jane Garrity informs us that:

“Liberty of London, at the forefront of fashion, adapted Greenaway’s drawings as designs for in-house children’s apparel and progressive mothers in “artistic” British circles  dressed their daughters in Kate Greenaway smock-frocks and bonnets in the 1880s and 1890s” (Garrity 273). 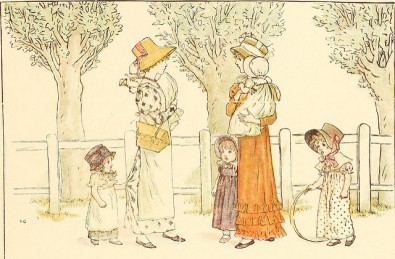 Greenway’s contribution to children’s book illustration is commemorated by the CILIP Kate Greenaway Medal, an annual prize awarded by the Chartered Institute of Library and Information Professionals for outstanding illustration in a children’s book. You can see the short list for this year’s competition here!